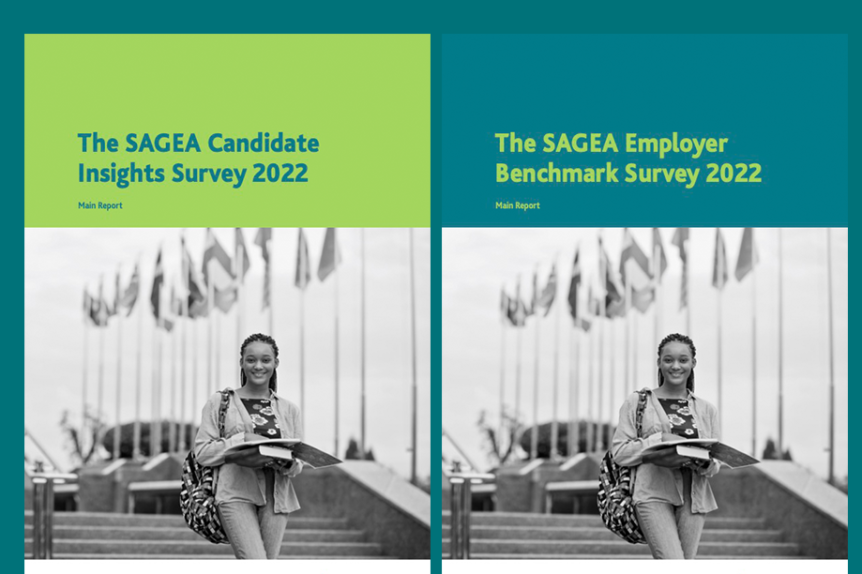 Graduate recruitment remains buoyant within a turbulent market, as candidates focus on development, flexibility, having an impact, and long-term job security

Results from independent research among leading employers in South Africa shows that these organisations are recruiting very healthy numbers of graduates in 2022.  The SAGEA Employer Benchmarking Survey 2022 is based on responses from 69 of the leading graduate employers in the country. The impact of the pandemic and the widespread economic turmoil it created invariably led to considerable change in the graduate job market, as employers reassessed their recruitment needs and shifted to digital campaigns. However, The SAGEA Employer Benchmark Survey 2022 shows that these employers are increasing the number of students on their graduate programmes and offering significant salaries to attract the very best candidates.

The SAGEA Candidate Insights Survey 2022 questioned 2,534 new or future employees about their job hunting and opinions about the job market. The research showed that candidates made an average of nine applications each, and under challenging circumstances most had secured multiple job offers. While employers received thousands of applications, many said there continued to be a shortage of candidates with the right skill set or qualifications.

Candidates who started their job hunting by their first year at university, were most likely to secure a graduate position with their top employer of choice. By comparison, students who waited until their final year before starting their job search were the least likely to have received a job offer from one of their top three choices of employer.

Highlights from The SAGEA Employer Benchmarking 2022 include:

Highlights from The SAGEA Candidate Insights 2022 include:

“It is truly wonderful to see so many of the leading employers increasing their commitment to early talent recruitment. While the last two years have been very uncertain for students, employers continue to recognise the value of hiring high-calibre graduates and the increase in vacancies is a clear indication that organisations want graduates to play a key role in their organisations.

Competition for the most highly sought-after roles is of course extremely fierce, and many students will find it difficult to get through all the stages of the selection process. However, the best candidates have a focused approach to their job search, and many are lucky enough to have multiple job offers from which to choose. As a result, employers continue to work incredibly hard to ensure these candidates feel connected and committed to both the role and the organisation itself. Employers who are doing this particularly well are engaging in meaningful, authentic conversations with job hunters via a variety of channels – both online and in-person – and at multiple stages through a student’s time at university.”