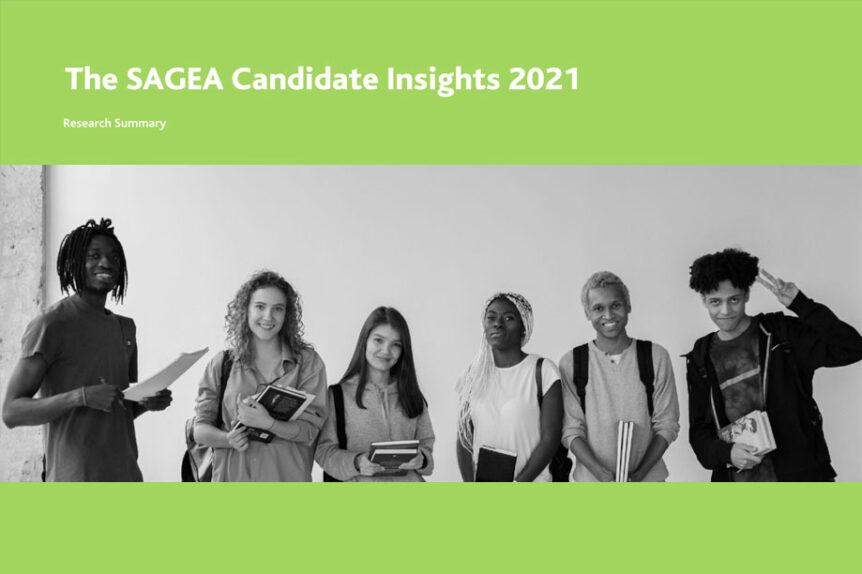 Results from independent research of leading employers in South Africa shows that these organisations continue to recruit healthy numbers of graduates in 2021.  The SAGEA Employer Benchmarking Survey 2021 is based on responses from 73 of the leading graduate employers in the country. The impact of the Coronavirus crisis and the widespread economic turmoil it has created invariably led to considerable change in the graduate job market, as employers reassessed their recruitment needs and shifted to fully digital campaigns. However, The SAGEA Employer Benchmark Survey 2021 shows that these employers continue to recruit students into their graduate programmes at a similar level to last year.

The SAGEA Candidate Insights Survey 2021 questioned 2,256 new or future employees about their job hunting and opinions about the job market. The research showed that candidates made an average of five or six applications, and that even in one of the most challenging years, most had secured multiple job offers.  While employers received thousands of applications, many said there continued to be a shortage of candidates with the right skill set or qualifications.

Candidates who started their job hunting by their first year at university, were most likely to secure a graduate position with their top employer of choice. By comparison, students who waited until their final year before starting their job search were the least likely to have received a job offer from one of their top three employers.

Highlights from The SAGEA Employer Benchmarking 2021 include:

Just over a third of employers were primarily recruiting graduates to fill roles that require in-demand or technical skills. Similar numbers confirmed that graduates are hired for entry-level roles, and that some (but not all) will progress to manager level. Some 32 per cent stated that graduates were hired to be part of the leadership development programme, with the view that they will become future managers of the organisation.

The accounting and professional services firms were the largest recruiters, with half of all vacancies in 2021. Other major recruiters in 2021 were banking and finance organisations and consumer goods companies and retailers.

By job function, the most vacancies were found in audit (TIPP), which accounted for more than two-fifths of total vacancies available in 2021.

The median number of graduate vacancies in 2021 is 24, which is similar to previous years.

The median graduate starting salary for 2021 was R220,000, which is unchanged from the figures recorded in last year’s survey.

Three-fifths of organisations have seen their recruitment budget reduce compared to last year, with half suggesting it has decreased ‘considerably’.

Two-thirds have run fewer events compared to last year and attendance levels have been mixed.

A fifth of those candidates who submitted applications were successful in reaching the next stage of the selection process. There were fewer reneged offers compared to last year.

Highlights from The SAGEA Candidate Insights 2021 include:

The most popular destinations were auditing, technology, legal and consulting.

The six universities with the highest attendance levels accounted for more than two-thirds of all survey participants.

While most candidates did not think the Government was handling the pandemic well, they were much more positive about the steps their universities had taken to manage the impact.

37 per cent felt the pandemic had made it harder to know which employers have graduate vacancies, while nearly a third said it was more difficult to have one-to-one conversations with employers and felt it was harder to get a clear understanding of the culture.

Over half of the candidates were going to be working in Johannesburg, while a sixth had secured positions in Cape Town.

Some 44 per cent expect to stay with their first employer for more than five years.

There is overwhelming support for graduate employers to return to university campuses for their future recruitment campaigns, with 82 per cent saying they thought employers should use ‘a mix of in-person on-campus recruitment events and online recruitment promotions’.

“It is incredibly encouraging to see so many of the leading employers preserving and strengthening their early talent recruitment. While this remains a very uncertain time for students, graduate employers continue to recognise the value of hiring high-calibre graduates and it is a clear indication that organisations still expect graduates to play a key role in their organisations.

Competition for these roles is of course extremely stressful, and many students are sending out panicked applications for any open vacancy. However the best candidates tend to focus their job hunt and many will end up having multiple job offers from which to choose, so employers have to work very hard to help ensure these candidates feel connected to both the role and the organisation – that is harder than normal as employers currently have to utilise virtual recruitment and selection methods, often not seeing a candidate in-person prior to offering a graduate position.  Employers who are performing well are typically engaging in meaningful, authentic conversations with job hunters via a variety of channels and at multiple times.”

1.   The SAGEA Employer Benchmarking 2021 and The SAGEA Candidate Insights 2021 were carried out on behalf of The South African Graduate Employers Association (SAGEA) by the specialist graduate research company, High Fliers Research Ltd.  Research was online, and took place from March to June 2021.

2.   The South African Graduate Employers Association (SAGEA)  is a professional association that has become the hub of graduate employment in South Africa.   Through exclusive insights projects, ingenuity and  connection to international organisations, SAGEA provides members with access to the latest graduate employment insights, trends, global best practice and resources to help them attract and retain the best talent for their businesses.

3.   The employers who participated in one or both pieces of research include:

The Shoprite Group of Companies